The Face of Newark Abroad

I know it’s close to Mardi Gras and everyone is talking about New Orleans. However, this city has been on my travel to-do list for years! The flavor and wealth of New Orleans is calling to me! Luckily I’ve made a few friends that are natives of the city and I can’t wait to crash at their place and have them show me all the local hang outs and hot spots!

What do you think of the city? 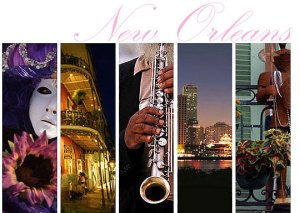 Ready to get messy? I am!

I’ve always wanted to visit the “Windy City” to try the pizza! It’s different from the pizza I grew up with. Our pizza is flatter. “Brooklyn style” I guess. I would like a real reason to use a fork and knife for my pizza. I hear the city is nice otherwise but I am quite interested in the pizza! I hope to visit Chicago one day and go on this pizza tour 😀 Would you go?

Flashback of the day: Copenhagen, Denmark

I LOVE Copenhagen, Denmark!! I need more time in that amazing city. Because I’m a junk-foodie, I will mention that I had a lot of slurpees there from 7 Eleven. Anyway, the city is beautiful and has great cultural entertainment!

Did you know that the Little Mermaid is Danish??! She is. I took a picture with her statue. This city really has so much to offer and it is at the top of my list of cities to return to. Please visit Denmark. The people there are super friendly and they made me want to learn some Danish.

Copenhagen, thank you for a great time! I shall return!

The Little Mermaid and Travelingmad!

Flashback of the day: Paris, France Bonne Année a Paris!

Happy New Year Paris! This flashback is a very fun memory. My friend Ted, (bottom left of the photo) invited us ALL to his apartment for drinks, snacks and a good time before we head to the Eifel Tour for the countdown. As you can see his apartment was about 11 or 12 feet only. There’s actually a shower door hidden in the picture. Anyway we had a great time at Ted’s and then took the 5 minute walk to the Eifel Tour. We (yankees especially) were waiting for some type of countdown. There wasn’t one so we counted down at least 3 times according to different watches before it actually happened.

The tour lit up and everyone was sprayed with champagne! It was really fun! Best Paris New Year’s ever! 😀 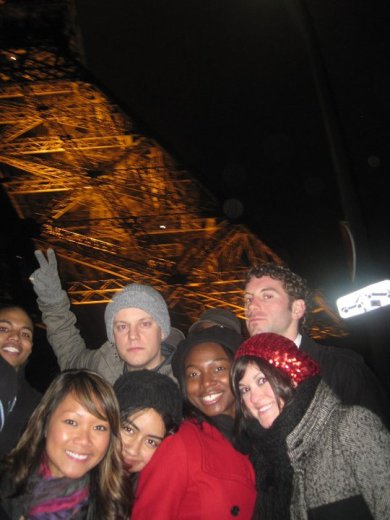 Me and some of my closest Paris friends. New Year’s 2011

Lake City, Florida is a small town. While visiting family there, we went to Old Times Buffet. {I still insist on calling it Old Timers; that’s what it was full of!} I really enjoyed myself though. The food was delicious!! We went during lunch time and ate until we couldn’t take anymore! Please eat here if you’re ever in town.

Iced tea from a plastic cup with a pig on it. Check!

Any restaurant that gives you plastic cups with pigs on them is going to give you a good, southern meal!

Flashback of the day: Vaxjo, Sweden

I traveled to Vaxjo, Sweden, the “Greenest City in Europe.” 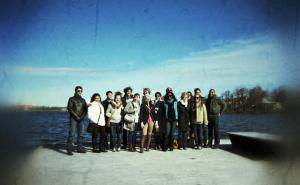 Group photo op during our walk by the lake.

It was brisk weather but a such a great trip! We took a serene walk by the lake. I learned about recycling, passive houses (I want one) and even toured a factory. I could work the hard hat look 😉 I loved that the factory didn’t have vending machines but provided baskets of free fruit in the break rooms! America, please take note.

My friend Meredith and I took a road trip to West Virginia from New Jersey. In “downtown” Martinsburg, we walked past beautiful old buildings and quaint little shops. Then we passed a place called Cherry Bomb Tattoo and Piercing! (Unexpected) A teenager actually asked us to take him there. We thought, “Um, NO!”

Also downtown, an outdoor art exhibit was taking place also where people had painted giant easels. We stopped for a quick photo opportunity.

Flashback of the day: Paris

In Paris, France, at a restaurant called La Perla, some friends and I met up for someone’s birthday drinks. I don’t drink so of course ordered food. I ordered a chocolate brownie. I was told they didn’t have ice cream and was surprised and disappointed but, hey, this is France!

When my brownie arrived I was still sad and said it would have been so much better with ice cream. My friend Deborah asked if I wanted some. I said, “Yes. Why? Do you have some?” She pulled a vanilla pop out of her purse and saved the day!! It was delicious. Thank God for foodie friends like myself!